The Shadow Secretary of State for Education, Kate Green MP held an hour-long discussion with a group of Blackpool Sixth students about current political issues.

Twenty students, including members of the college’s Politics Academy, met with Kate and former Blackpool South MP, Gordon Marsden online. The discussion focused mainly on educational issues, especially the impact of the Coronavirus pandemic on students’ learning and assessment.

Kate, who is MP for Stretford and Urmston, began the event by asking students a range of questions about their views on the education system and the electoral system. She said that too often politicians do not consult young people on issues that affected them and their futures. “We absolutely need to make sure we are hearing young people’s voices.”

Andrew Speight, Youth Parliament representative for Blackpool said that lowering the minimum age for voting to 16 would mean that young people were taken more seriously by politicians.

Charlotte Tabeart from the Politics Academy asked if Kate felt that the current education system met the needs of young people in the 21st century. In her response, Kate argued that currently the curriculum was too narrow to engage all young people effectively and she also pointed to the lack of emphasis on digital literacy as a deficit in the present system. She also felt that the division between ‘academic’ and ‘vocational’ education was unhelpful and that young people were being asked to specialise too early on only a few subjects during the post-16 phase. “The world is increasingly complex and fast-changing. We need a more adaptable system where people can re-train throughout their lives.”

Kate also highlighted the need to pay more attention to emotional and social wellbeing, something that schools and colleges are increasingly doing but without much support from the educational system as a whole. She questioned whether it was right to put such a heavy emphasis on examinations.

Max Hopkinson from the Politics Academy asked whether students and staff should be compensated for the additional costs they have incurred from having to work from home during the lockdown periods. Kate responded to say that she felt that the more important issue was how the Coronavirus pandemic has hit the poorest families and communities hardest and that this has further exacerbated the existing inequalities in our society which need to be addressed.

When asked at the end of the session what one thing the Shadow Secretary of State would most want to do to improve the education system she said, “All the research shows that the most important thing we can do is invest more in the pre-school stage. I would want to make sure that no future government could reduce funding to this vital service.”

The organiser of the talk, Excellence Programme Co-ordinator, Peter Wright thanked Kate Green and Gordon Marsden for giving up their time to speak to the students.

The students had clearly relished the experience. Max Hopkinson said, “It was a really great opportunity and I was happy that I had my question answered by a MP.” 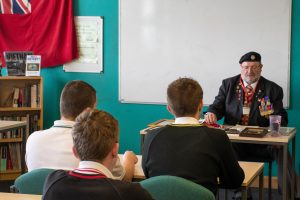